Heinrich Hohl was born on 15th January 1869 in Nový Jičín, in the house No. 8. He had entered history as a hotel proprietor and restaurateur with respect to elegance, good food and drink. The construction of a neo-historical building, which replaced old Baroque houses on the corner of the formal Radniční and Zillichova streets, was submitted to Josef Blum’s company. He also presented other buildings in Nový Jičín such as the beautiful villa of Anton Peschl, the Jubilee School, the restaurant Nové Slunce or the District Court.

The Café and Restaurant Heinrichshof welcomed the first guests during the night from 22nd to 23rd December of 1899. At that time the thirty-year-old son of August Hohl and Antonie Hohl born Pischke was in charge. We can assume that Heinrich Ernerst Hohl was already an experienced innkeepr at that time. His father already led the restaurant U Zlatého lva , the Hotel Evzen and the cafes Schermer and Laudon.

The café became of the town’s most spectacular places. The elegant halls were equipped with diaries, magazines, and even Meyer’s conversational lexicon. A billiard was played in the club rooms. The entire building was heated by central heating.

The ornaments and other Art Nouveau elements in the newly constructed building were replaced by the flat line and geometric shapes. Already at that time the visitors of Nový Jičín started to fancy the new hotel, especially for its presentation of the quiet zone in the very centre of the town.

Regarding the private life of Heinrich Hohl it was not so simple. He had to wait for his lifelong love, Miss Serafine Kröner . They got married only after his mother’s death in December 1921. He passed away at the age of 64 in Nový Jičín, on 24th December in 1933. 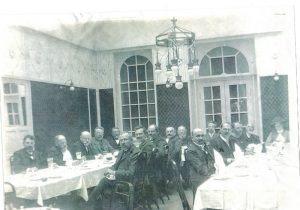 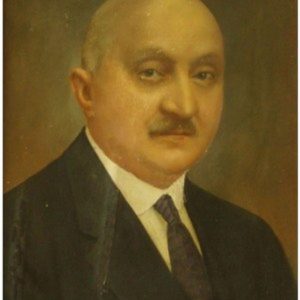 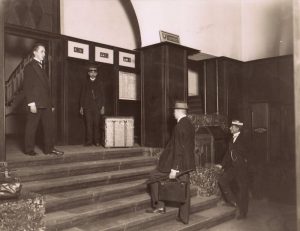 The wedding lounge is decorated with the work of Eduard Veith

With a bit of fantasy and considering that the broadly talented painter Eduard Veith lived and worked in Nový Jičín for several years, we can presume that he was also connected with the Hotel Praha. However, there is no proof that he had ever sat under the stucco ceiling of the Art Nouveau café. Still we do not want to believe that he would have missed a tour of a sought-after business with Viennese life.

We can say that he somehow reconnected with the present Hotel Praha. Beautiful copies of six of his paintings decorate the inside and make the interior of the lounge on the grand floor more pleasant. They refer to his work and life closely connected with Nový Jičín.

Eduard Veith was born on 30th March in 1858 to the family of a room painter Julius Viet and his wife Susanna. Already as a child he showed a significant artistic talent. His father trained the craftsman of the room painting. As a 16-year-old he went to Vienna to study the School of Arts. When he returned to his hometown, he helped his father with the painting of churches, synagogues and ceremonial halls. Soon they received orders in Trieste, Venice or Bucharest. 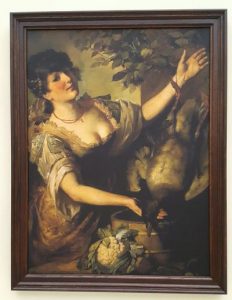 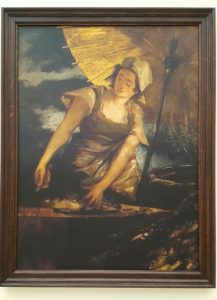 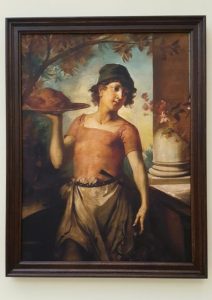 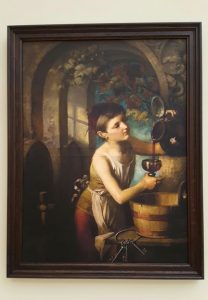 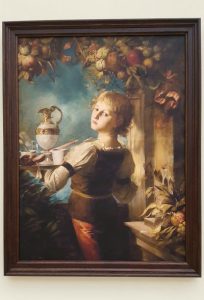 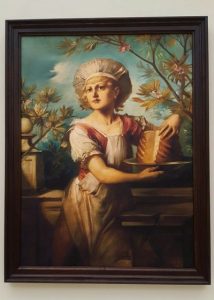 He returned to Nový Jičín after he drained his savings. And at that time he was asked to decorate the villa of Hückl family, the owners of today’s already famous hat factory. Mirror-conceived magnificent buildings grew at the edge of the town in a small natural park between the years 1880 and 1882. Eduard Veith equipped them with a set of works of various painting techniques and themes. Three of his oil paintings set in a wooden panelling are still preserved on the ceiling of one of the villas. Other canvases are deposited at the Museum of Nový Jičín. Six paintings from this collection are those copies that decorate the wedding lounge of the Hotel Praha.

The hotel was not built at the time when Veith worked for the hat maker’s family. However, he together with his father painted afterwards today’s building of the town hall and he was happy to come back repeatedly to his home town for the rest of his life. However, his permanent living was in Vienna where he lived since he had finished his studies. His paintings can be found at the Prague State Opera, the Vienna Opera House, the Berlin Theatre and the Ostrava Theatre. He also painted for Gutman, Rothschild or Seilerna.

The strong relation to Nový Jičín was confirmed by donating a number of his works to the local museum. Eduard Veith died on 18th March in 1925 in Vienna. He was buried in the cemetery of Döbling
(source: Muzeum Novojičínska)

The iconic thonets returned to the Hotel Praha

The path to the restoration of the Hotel Praha’s First Republic tradition is neither short nor simple. We take seriously every step and we eager to give back the listed building with admirable interiors to the inhabitants of Nový Jičín. It is becoming the pleasant place for family gatherings, business meetings and space where wedding receptions, children’s celebrations, conferences and trainings can be held.

The destiny of the Café and the Hotel Heinrichshof is so complicated that it could be published in a book. The interiors changed several times. After the war they were even plundered and again rebuilt during the normalization. One of the first debates therefore related to the fact how the café, formerly known as „Viennese“, would look like.

The period photography and several appointments with conservationists helped with the decisions that needed to be made. We bet on the well-established principles, the Czech hard work and the return to the original look of the café. At the time of the greatest boom the guests enjoyed sitting on the famous bent chairs of the company THON (now TON).

The chairs are again made of dark colour wenge with the back filled with a typical plywood fan. The Hotel Praha managed to gain 148 of these light, elegant and comfortable beauties. One hundred is available to the visitors of the café, and other nearly fifty chairs can be found by guests in the lounge. Of course, rectangular tables have been added to the thonets in the corresponding design.

The logo corresponds to post-war graphics

The inhabitants of Nový Jičín were accustomed to see the signs HOTEL PRAHA, CAFÉ, RESTAURANT, and CONFECTIONERY above the entrance portal of the neo-historic building. We obviously intended to preserve this as it is important to the local people and visitors from nearby towns and villages.

Changes in the logotypes and inscriptions of the Café and the Hotel Heinrichshof (from 1945 Hotel Praha) are worth noticing. Just after the World War II the inscription was written in San-Serif font, the signs were very thin and wide. In August 1945 the ravaged and robbed hotel was assigned to the national administration. It was again opened on 1st October in 1945 and hats appeared in the logo, which were typical for Nový Jičín. Other items were also shaped as hats, for example key-to-room labels. The script remained in San-Serif, but changed to bold and another font.

Graphical design of the latest logo did not correspond with the original one. And since our goal is to represent the hotel, the café, the confectionery and the related services as debonair and elegant, we also searched for the appropriate font. Experienced graphic designer received the period photographs and matched them with indigent fonts. After consulting with the historical office and the Museom of Nový Jičín we chose the appropriate one.

The Prague Hotel‘s new logo is the closest to that one of the years 1945-48. It is sleek, original, beautifully simple and internationally legible at the same time.